Well, after an entirely injury-free life, I just received my first non-dental stitches.

After successfully skiing and snowboarding for twenty years with nothing more than the occasional muscle or ligament issue, I finally managed to put a gash in my right calf not on the slopes, but when walking back from the après-ski bar. Note that when you see an unusually steep three-foot snowbank spiked up between the road and the sidewalk, it is often a good idea to presume that there is a sharp metal barrier concealed therein. I missed the hop, thought ‘Ow,’ and only noticed an hour later that I was putting blood on the floor of my ryokan (Japanese inn).

I actually wasn’t planning to go to the doctor until I discovered, while replacing my blood-splotched T-shirt-and-toilet-paper tourniquet with proper gauze and disinfectant the next morning, that I could put my finger right into the pen-sized wound without any sensation of pain.

I walked 40 minutes to the nearest clinic, and then, five or six stitches later, decided to kill time by wandering around Hakuba taking photos for two hours. I regretted that when the local anesthetic wore off. Getting off the bus at rest stations on the way back to Tokyo, my right leg clenched up to the flexibility of a five-iron.

At the clinic in Hakuba, the doctor's bedside patter consisted mostly of jokes about how much money he was making off all the ski injuries that day. I talked him out of writing me a shindansho (an official—and expensive—doctor’s letter), and after stitching me up he jovially asked if I wanted any antibiotics, which sounded like a trick question.

“Um… do most people get antibiotics?” I asked.

“Well, most Westerners seem to want it.”

Since when was my medical expertise a part of the prescription process? “And what would your recommendation be...?”

“You should probably get some.”

Maybe he just wanted to justify the price tag: A whopping ¥31,100 (over $300) for ten minutes’ work and a few drugs. Even the secretary seemed a little embarrassed when she showed me the bill. She explained that prices went up on a holiday, which it happened to be.

One of the other guys in the clinic had collided with a fellow snowboarder. The edge of the snowboard had sliced open his arm before breaking it into several pieces. When he learned that his patient was on holiday from Australia, the doctor advised, “You should probably go home right now.” That was after asking him if he felt like he wanted surgery at home.

Fortunately, before my mishap I’d already enjoyed a beautiful day at Tsugaiké Kōgen and another day of incessant snowfall at Iwataké, so I didn’t mind missing out on our last day at Happo Oné. Well, not too much. I was sorely tempted to go back out while the anesthetic was still working. 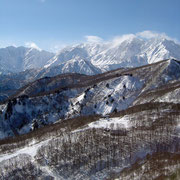 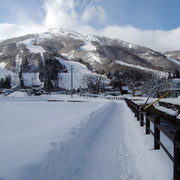 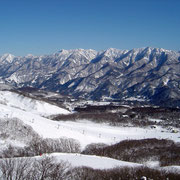 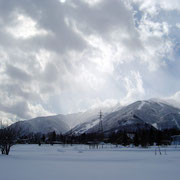 Tsugaiké had some nice runs at the top, though I doubt they’d have been of any interest without the waist-deep powder covering half of them. Iwataké had some fantastic on-piste/off-piste runs, but again, the powder completely obscured what was actually meant to be on-piste, so I can’t comment on a normal day.

I can now pull a 360 fairly consistently on my board. Need to figure out my next trick. But first I need to get my right leg back.

I have developed a serious respect for the limited radius of existence adopted by the elderly slow. The 6-minute walk to the station from my apartment has become a 15-minute hobble. I normally walk faster than anyone else on the street, so having people come up behind me is really unnerving.

The stitches come out in about two weeks. Kudos to Jacob for the initial wrappings.