I arrived at Kaihin Makuhari station at 10:00 and slathered sunscreen on my face, neck, and shoulders as I walked down the raised concourse to Makuhari Messe (pronounced ‘mess-say’). Stick-like ‘companion showgirls’ greeted me at the entrance; I didn’t remember them being there in previous years. Maybe it had to do with this being the 10th anniversary of Summer Sonic, MTV Japan’s annual three-day music festival, challenged only by the Fuji Rock Festival for primacy among Japan’s popular music extravaganzas. I’d intended to come with a friend, but tickets had sold out.

Wristband in place and a towel across my neck, I entered the cavernous ‘event space’ at Makuhari Messe, immersing myself once again in a vast structure that looked more like it was designed to hold decommissioned SR-71 reconnaissance jets than a field of concessions stands and three concert stages. I started out at 11:00 a.m. with School Food Punishment, a cute female-led J-rock band that played at the Dance Stage, occasionally drowned out by the unlisted punk/metal band next door.

Half an hour later I emerged to face the searing August sun. Traversing the distance between the Messe and Marine Stadium was a hassle, but there were no indoor acts for another hour, and the Japanese punk/metal band TOTALFAT was playing at the Island Stage in front of the stadium. A constant stream of crowdsurfers flowed over my shoulders into the waiting arms of a massive security guard, the same person going by at least five times. Next to me, a hyperactive guy in red suddenly stood stock-still, holding up a found cell phone until its owner appeared, then devolved back into flailing limbs. I stumbled out forty minutes later with a bruise on my hip, footprints on my elbows, and something that felt suspiciously like heatstroke, foolishly heading for the Beach Stage.

I joined about a hundred people flaked out under an awning, only my lack of scissors keeping me from cutting my pants off at the knees. A constant, life-giving breeze blew in off Tokyo Bay. I hadn’t meant to stay, but I found myself drawn in by Miho Fukuhara’s warm stage presence, incredible voice, and remarkably fluent English. Two refreshing mountains of ‘Hawaiian shaved ice’ kept me alive long enough to get back to the air-conditioned Messe for lunch.

I munched on a Sasebo Burger—possibly the best hamburger in Japan—while watching a few manzai comedy duos do their thing on a side-stage, then took a thirty-minute nap in the empty Mountain Stage. I’d come to Summer Sonic for three bands: Boom Boom Satellites, Nine Inch Nails, and My Chemical Romance. They were playing consecutively in the Marine Stadium from 4:55 to 9:00 p.m., and I didn’t want to risk messing it up due to something trivial like heatstroke or a toilet break. 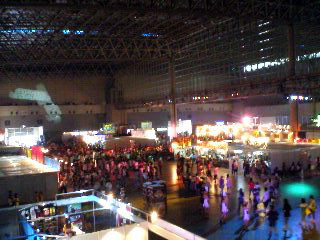 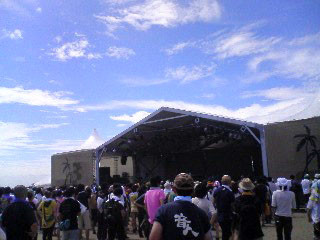 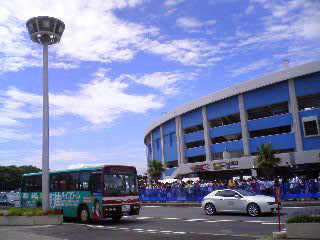 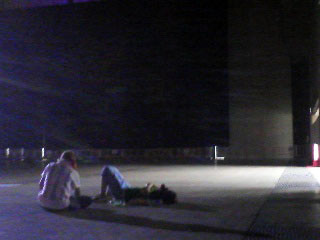 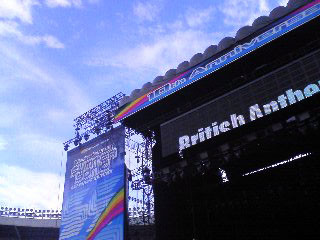 I entered the stadium at the end of Paramore’s act, vocalist Hayley Williams’ vivid orange hair flailing back and forth atop an ill-chosen Japanese schoolgirl’s uniform. She finished with ‘doumo arigato,’ pronouncing the words properly, and not—as most musicians do—like she intended to finish with ‘Mr. Roboto.’

The Boom Boom Satellites’ sound check alone was impressive. Combining electronica with electric guitars, they contributed to the beat-laden soundtrack to the 2004 CG-anime version of Appleseed, and Michiyuki Kawashima and Masayuki Nakano exuded cool in a way that few Japanese bands know how to do. The hyperactive guy in red was back—he appeared wherever moshing was to be done—and the largely Japanese audience was now joined by a few shirtless, meaty-armed, bleary-eyed foreigners, amusing to watch but a danger to get close to as they chucked crowdsurfers half a meter into the air to send them crashing down on the necks in front of them.

After twenty years of musical innovation, Nine Inch Nails polymath Trent Reznor recently announced that NIN will finally be coming to an end. I had spotted a plethora of NIN shirts throughout the day. Talking to random people before the show, I was hit with the realization that this was how music was supposed to be: A group of people with a common interest gathered together to share a common joy. Everyone here ‘got it.’ You didn’t have to explain yourself to a soul. When the music started, the crowd was unstoppable.

The first ten minutes of the set was like ocean movements. The entire front of the audience careened from side to side as we tried to mosh while packed like sardines. One massive guy started making ‘mosh holes’—he’d push everyone back until there was a big empty circle in the center, and when the beats kicked in everyone would smash into the middle all at once. Trent played on through apocalyptic weather, the clouds dumping us with forty minutes of good ol’ Japanese ō-ame (heavy rain) of the kind that rearranges train schedules, sprinkled with the occasional flash of lightning. My cell phone drowned. When water turned the vinyl ground covers into marshland, the mosh hole doubled as a Slip’n’Slide. It was a jubilant, chaotic, and fitting final tribute to one of the most vibrant bands of the last two decades.

I probably should have gone to see Aphex Twin after Trent finished up. While I enjoy their grandiloquence, My Chemical Romance has always felt a little campy to me, singing about death and depression the way you’d experience it through your Playstation. Frontman Gerard Way’s constant stage-managing of the audience, punctuated by mincing and homoerotic microphone gestures, made My Chemical Romance feel like spectacle without substance. Their fireworks and flame spouts couldn’t match the intensity Trent achieved by punching over a microphone stand.

Summer Sonic plays for three days in both Tokyo and Osaka every August. Tokyo tickets are ¥14,000 for one day and ¥39,500 for three days. Kaihin Makuhari station is roughly 30 minutes from Tokyo by express train on the JR Keiyo line (¥540).