Little-Known Earthquake Tip: Better than getting under a table is hunkering down beside a sturdy object. Even after it's crushed, the object may still be able to brace up enough material to make a gap that will keep you alive.

With this in mind, last night I considered sleeping on the floor between my bed and couch. Then I considered that I might just be positioning myself to get my head crushed by my fridge and my legs shattered by my shelves, so I just hoped my headboard had enough rigidity to keep anything from flattening my head and made a parasol of my futon. I kept my phone close at hand and a coat beside me on the floor.

I woke up to an aftershock around 8:30, which could have been either out of Fukushima or Miyagi, then got a good shake out of Ibaraki's 6.4 quake around 10:30. Since then there's been nothing higher than a 4. As we approach dinner time, there have only been about a dozen aftershocks all day.

At 3:00 they reported that hydrogen was building up in the casing of the #3 reactor, which was what led to the vaporiation of the concrete housing around the #1 reactor yesterday. Getting this under control seems to rely on getting the water pumps working again.

The Onagawa Nuclear Power Plant in Miyagi also reported levels at 21 uSv at 1:50 p.m., which is higher than usual. I have now added the word "roshin" ("core") to my Japanese vocabulary.

With every new piece of news that comes in about the reactor, the question is, "How bad is that?" Each station has brought in a parade of experts who try to explain. Thankfully, they're looking for reasons why everything is fine, not for reasons to panic.

For a sense of perspective, the IAEA scale for nuclear disasters runs from 0-7, with Chernobyl at a 7 and Three Mile Island at 5. This morning they ranked Fukushima Dai-ichi as a 4.

For those who are interested, there's an American plant risk management engineer who's been doing some great analysis on Twitter: http://twitter.com/arclight

There is also an excellent Q&A here:

Further south in Natori City, people were writing notes to loved ones and posting them on the walls at the evacuation centre.

At half past twelve, the initial quake was upgraded from 8.8 to 9.0. That put it tied at #4 among all the earthquakes to have struck the planet Earth, and 180 times the power of the Kobe earthquake. 5 people are reported dead in Tokyo. In the north, the estimated total number of dead and missing is now up to 3000. There are 250,000 evacuees in Miyagi and Iwate Prefectures alone, and they still need water and blankets. So far volunteers have been asked to stay away while rescue crews do their work.

Amid all this, the closing of Disneyland and Disney Sea was listed on the ticker at the bottom of the screen. There was also an apocryphal Facebook report of chemical agents in the rain due to the fire at the refinery in Chiba, but this has been countered by official reports.

Around noon I headed out to do some shopping at the local Seiyu.

Before going, I put air in my bike tires. Why? Because if it comes to it, bikes don't need gas. Things I've learned from the Zombie Survival Guide...

Traffic in Saitama City seemed normal, and there were people getting haircuts at the barbershop. It was lovely weather, and friends of mine were planning to blow off some stress with a trip to Yoyogi Park in Tokyo, followed by karaoke. I'd like to join them, but I don't think I'd be much fun right now. I'm a bit too much wrapped up in this.

In the grocery store, at first everything looked relatively normal. There was plenty of fruit and fish, and the lines seemed just a little longer than usual for a Sunday. However, almost all of the meat had been sold, and fresh and packaged bread was gone.

On the empty bread rack was a sign reading, "These products are sold out. The next delivery is uncertain. We are apologize for the inconvenience." The same sign was posted where there were once 2L water bottles and packs of cup ramen.

People weren't so much panic buying as stocking up—the lines weren't long, but everyone had a bit more than usual, typically including several 2L bottles of green tea or sports drink and a big pack of toilet paper. Snacks and Coke were essentially untouched, and there were fresh pastries aplenty. It's interesting to see how our priorities shift when we're forced to think seriously.

All the sugary cereal was still there, but the granola was gone.

The problem isn't so much overconsumption as a lack of replenishment. Talking to a clerk at my partially-depleted local 7-11, she said that packaged bread came from factories in northern Japan, which would explain why some products are selectively sold out.

It's a bit of a mix. One friend in Yokohama tells me that grocery stores are half empty. Another in Kichijoji insists that everything looks normal. We'll see. I also just saw a report that gas is getting short in Saitama as people fill up their tanks just in case. 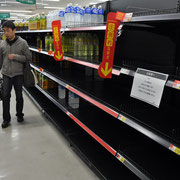 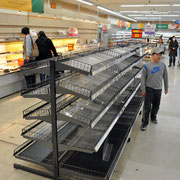 I just saw a report from a woman in Rikuzen-takata, Iwate, who was on the third floor of a building with her daughter when the tsunami came. The water came in, and the woman made it, but her daughter was swept away.

Images of Miyagi before and after the earthquake:

Scroll over to see the comparison.